Standard: Use a variety of sentence patterns when speaking or writing.

Explore Poetry by Women of the Harlem Renaissance 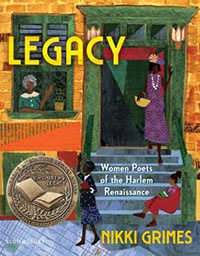 Legacy is a treasury of important women poets. Nikki Grimes brings their voices alive again in this adaption of their work that incorporates their stories and words into new poems. The "Golden Shovel" technique used here allows educators to challenge students to create their own poems from these classics.

Legacy : Women Poets of the Harlem Renaissance by Nikki Grimes

In Legacy - Nikki Grimes revisits the poetry of women poets of the Harlem Renaissance.
Featured poets:

Please see this link to the book and biographies of each poet: https://bit.ly/3awzPwt

Nikki Grimes is one of America's most prolific and gift poets. She is a generous educator with materials freely available to the community at https://www.nikkigrimes.com/

This guide is intended to support her book: 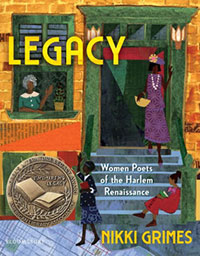 For centuries, accomplished women—of all races—have fallen out of the historical records. The same is true for gifted, prolific, women poets of the Harlem Renaissance who are little known, especially as compared to their male counterparts.

In this poetry collection, bestselling author Nikki Grimes uses "The Golden Shovel" poetic method to create wholly original poems based on the works of these groundbreaking women-and to introduce readers to their work.

Legacy also includes a foreword, an introduction to the history of the Harlem Renaissance, author's note, and poet biographies, which make this a wonderful resource and a book to cherish.

Choose a line from the poem To A Dark Girl  and compose your own Golden Shovel poem.

To a Dark Girl

I love you for your brownness,
And the rounded darkness of your breast,
I love you for the breaking sadness in your voice
And shadows where your wayward eyelids rest.

Something of old forgotten queens
Lurks in the lithe abandon of your walk
And something of the shackled slave
Sobs in the rhythm of your talk.

Oh, little brown girl, born for sorrow's mate,
Keep all you have of queenliness,
Forgetting that you once were slave,
And let your full lips laugh at Fate!