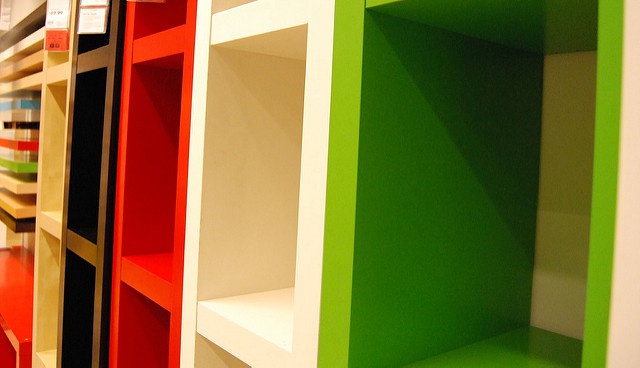 A geometric model can be used to investigate common multiples. When congruent rectangular cards with whole-number lengths are arranged to form a square, the length of the square is a common multiple of the side lengths of the cards. The least common multiple is the smallest square that can be formed with those cards.

From Rectangles to Squares

Begin the class by projecting the 2 × 3 card from the interactive on the board. Show students how to make copies of the card and then give them a few minutes to make and describe squares.

The purpose of this discussion is to ensure that all students understand how to make squares with the cards. When you choose student responses to share with the class, pick responses that make this concept clear.

From Rectangles to Squares

Use the 2 × 3 rectangle to do the following.

Most likely, students will build a 12-unit square and a 24-unit square, although some students may mention squares with sides of 36 or 48 units.

Think about the smallest square you made using the 4 x 6 rectangles.

As students work, look for work that:

Prepare a presentation that shows your work and supports your conclusion about how you know you made the smallest square possible.

Have students give their presentations. Focus the student discussion on noticing that for every square that students build, multiplying the edge length of the card by the number of times that card is used along one side gives the length of the square.

Be sure students understand that the edge lengths of the squares represent the common multiples of 4 and 6, the width and length of the rectangle.

If you ask students how they would find the least common multiple without drawing rectangles, some students might suggest listing the first few multiples of both numbers in a table and then finding the lowest multiple that is common to both. Other students might suggest listing the multiples of one number, and then dividing each of those multiples by the other number. The first multiple that divides evenly is the least common multiple of both numbers.

ELL: Provide ELLs the opportunity to represent their thinking using diagrams if they wish to be sure that language is not getting in the way of communicating their understanding.

Take notes about your classmates’ thinking as to how they know the square they built is the smallest square possible.

Write the least common multiple of each set of numbers.

Generate and list the multiples of each number. Look for multiples in common. Then find the smallest one.

SWD: Reflecting on learning can be challenging for some students. Support students who may get lost in the meaning of this task by providing specific questions to which they can respond. Some students may require sentence starters and/or paragraph frames as writing support.

Also, support students as they reflect on their learning by providing models from earlier lessons that include the elements of a complete reflection. Create a “reflection checklist” to help students to self-assess the quality of their reflections. This will help struggling writers to self-monitor their work.

Summary of the Math: All About Multiples