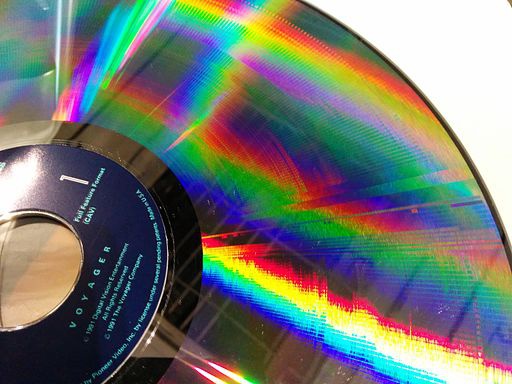 Students use tape diagrams to model relationships and solve problems about types of DVDs.

Tape diagrams are useful for visualizing ratio relationships between two (or more) quantities that have the same units. They can be used to highlight the multiplicative relationship between the quantities.

Point out that the unit rectangles in tape diagrams are equal in length.

A store sells 10 comedy DVDs for every 90 action DVDs.

This relationship can be shown using a tape diagram. In the tape diagram, each unit (each square) represents 10 DVDs. There is 1 unit of comedy DVDs and 9 units of action DVDs.

There are different ways to arrange the tape diagram. You can see the ratio between the two quantities of DVDs more easily in Tape Diagram 2.

Discuss the Math Mission. Students will use tape diagrams to represent ratios and to solve problems about ratios.

Use tape diagrams to represent ratios and solve problems about ratios.

Have students work in pairs on the problem about Carlos’s DVD collection.

Students represent ratios as tape diagrams in order to represent and solve problems.

Students may struggle with how best to communicate what the units represent on a tape diagram; prepare to build on these efforts in the Ways of Thinking discussion, with attention to the clarity and precision of explanations.

Student doesn’t understand the problem about Carlos’s DVD collection because he or she misinterprets the tape diagram (e.g., thinks 1 unit of the given tape diagram represents 1 DVD).

Carlos has a DVD collection. The ratio of action DVDs to mystery DVDs in his collection is 5:2. The tape diagram shows this ratio.

Have students work in pairs on the problems and the presentation.

Students represent ratios as tape diagrams in order to represent and solve problems.

Students may struggle with how best to communicate what the units represent on a tape diagram; prepare to build on these efforts in the Ways of Thinking discussion, with attention to the clarity and precision of explanations.

In the problem about Emma’s DVD collection, the student makes a tape diagram that doesn’t represent the situation.

Emma has a DVD collection. The ratio of drama DVDs to mystery DVDs in her collection is 7:3.

Listen and look for the following student thinking to highlight during the Ways of Thinking discussion:

SWD: A common issue for struggling students is not understanding what each part of the tape diagram represents. Have students reread the problem aloud, articulate their thinking, and then compare their tape diagram to a peer’s tape diagram. Comparing the diagrams will assist them in seeing any misconceptions they may have.

Explain how you made the tape diagram for Emma's DVD collection and how you used tape diagrams to help solve both problems.

Focus the discussion on how students used the tape diagrams to solve the problems.

For Carlos’s problem, students should explain how the ratio 5:2 is shown in the tape diagram (as a length of 5 units compared to a length of 2 units). Students might also comment on the fact that the unit length on each tape is the same. Have students clarify how they figured out what each unit length represents.

For Emma’s problem, have students explain how the tape diagram they made represents the problem situation. Ask:

Have students who completed the Challenge Problem present their solution and discuss as a class.

ELL: Give students plenty of wait time as some of them are learning and processing new mathematical information in a second language. Write on a chart the key points that students make during their presentations.

Frame the discussion as a collective effort to clarify and refine student explanations so that they are as precise as possible.

Take notes about the different approaches your classmates used in making their tape diagram, and how students used the tape diagrams to solve the two ratio problems.

A tape diagram allows you to compare two amounts by representing each amount as a length, with both lengths divided into units of equal length.

Summary of the Math: Tape Diagrams and Ratios

Have each student write a brief reflection before the end of class. Review the reflections to find out how tape diagrams help students understand ratio.

ELL: Allow some additional time for ELLs to discuss their ideas with a partner before writing, in order to help them organize their thoughts. Allow ELLs who share the same native language to discuss in their preferred language and to use a dictionary.