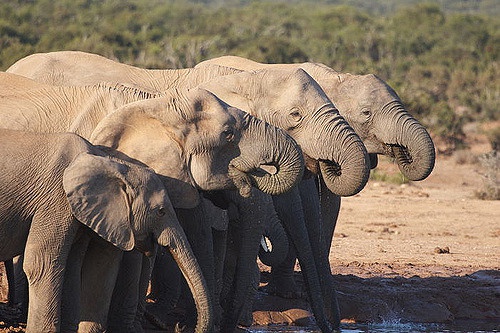 Students make a box plot for their typical-sixth-grader data from Lesson 7 and write a summary of what the plot shows.

Using the line plot from Lesson 4, students construct a box plot. Students learn how to calculate the five-number summary and interquartile range (IQR). Students apply this knowledge to the data used in Lesson 7 and describe the data in terms of the box plot. Class discussion focuses on comparing the two graphs and what they show for the sets of data.

A box-and-whisker plot, or box plot, shows the spread of a set of data. It shows five key measures, called the five-number summary.

This diagram shows how these values relate to the parts of a box plot. The length of the box represents the interquartile range (IQR), which is the difference between the lower and upper quartile.

Have students read about drawing a box plot and the five number summary.

SWD: Students have learned and retained information from prior learning experiences, but do not realize when to use that information. Teachers need to remind students of what they know, but also when to apply that knowledge. This strategy is sometimes referred to as “priming” background information. Priming background knowledge can be done in simple ways, such as merely stating “Remember when we learned…” or “See how this concept applies in this situation, too?” It may also involve a more intensive overview of a topic.

Go over the mathematical language used throughout the module. Make sure students use that language when discussing the problems. Provide important vocabulary on an anchor chart in a prominent location in the classroom.

This image shows a box-and-whisker plot (or just a box plot).

Discuss the following information with your partner.

Explain that today students will learn to make a new type of graph that is about measures of spread. Allow students some time to think about how the five-number summary and box plot are related.

Ask students to think about what the box plot shows, giving them a few minutes to discuss with a partner. Elicit from the students that the data has been divided into quarters (quartiles):

The width of the box is called the interquartile range (IQR). It is the difference between the lower and upper quartiles. Since the box contains the second and third quarters of the data, this is the middle 50%.

Review the text in the student material, which shows how to find the lower and upper quartiles from an ordered list of data.

These are the quiz score data used in Lesson 4:

Discuss how the five-number summary is represented in a box plot.

Discuss the Math Mission. Students will construct a box plot to show the spread of their data about a sixth grade student.

Construct a box plot to show the spread of your data about a sixth grade student.

Create a Box Plot of My Data

Students will work individually as they calculate the five-number summary for their data and draw a box plot above their line plots from Lesson 7, Task 3. Students will need to have a copy of their line plot in their Notebook so they can draw their box plot directly above it. The copy can be a screen shot added to the Notebook, or the saved state of the interactive. If students are struggling to draw their box plots neatly, suggest that they add the Small Graph or Big Graph background option to their Notebook page.

To draw a box plot, draw vertical lines from the extreme values. These are the numbers that define the range and are called the lower extreme and the upper extreme. In the box plot they will visually show the range; the spread of the data. Next, extend the lines showing the middle 50% of the data. These lines are called the lower quartile and the upper quartile. Lastly, draw a line for the median. Then draw horizontal lines to form a box around the lower to upper quartiles, and lines from the ends of the box to the extremes (the “whiskers”). ELL: Help students access the mathematics by reviewing key information before beginning the problem. Walk students through the problem and make sure that the diagram shows all of the given information.

Students think a long box or a long whisker means there are more values in that part of the plot.

Create a Box Plot of My Data

Find your work about a typical sixth grade student from the lesson "Describe a Sixth Grade Student". Copy your line plot from Lesson 7, Task 3, into your notebook.

Students will prepare presentations to share with their classmates.

ELL: When selecting a group of students to present in the Ways of Thinking section, ensure students present a topic they are confident about. Have students draw diagrams or demonstrate their knowledge in some other way than through verbal language alone.

Be sure to encourage ELLs to share, even if their pace might be slower than their native counterparts.

SWD: Some students may need additional time to process prompting questions. Provide students with a written version of the question(s) so they can refer to them as a resource.

You might suggest that students draw and label a generic box plot to help them remember how the five-number summary is related to a box plot:

Consider these questions, emphasizing that a box plot shows measures of spread:

Mathematical Practice 7: Look for and make use of structure.

All About Box Plots

A box plot shows the five-number summary, which includes the lower extreme, the lower quartile, the median, the upper quartile, and the upper extreme. A box plot divides the data into four quarters (quartiles), with the box showing the middle 50% of the data. The width of the box is the interquartile range. A box plot does not show individual data or the shape of the data, but it does show how the data are spread.

Summary of the Math: All About Box Plots

Write a summary of what you learned about box plots.

Reflect on Your Work

Have each student write a brief reflection before the end of class. Review the reflections to learn the ways in which students think line plots are similar to and different from box plots.

Write a reflection about the ideas discussed in class today. Use these sentence starters below if you find them to be helpful.

Box plots are similar to line plots in the following ways …

Box plots are different from line plots in the following ways …